Program:
Talk 1
Title: In/Visible Images of Korean Women in the Soviet Korean Newspapers
Speaker: Prof. German KIM (Kazakh National al-Farabi University, Kazakhstan / Konguk University, Korea)
Abstract:
Due to the class and ideological discrepancies, the image of a Soviet woman was interpreted differently in the Soviet and Western academic literature, mass media and art. In the Soviet Union, it was typical to demonstrate only visible, considerable achievements in the field of emancipation and gender equality. In the eyes of the Western world, the image of a Soviet woman was also stereotyped bearing some critical connotation. Such opposing approaches in the interpretation of the image of a Soviet woman can be compared to an iceberg, when each side revealed only its visible tip, hiding the underwater block. Based on the photo collection, the author presents visible and “invisible” images of Korean women in the materials of the Soviet Korean newspapers Senbon (선봉, Vanguard. 1923-1937) and Lenin Kichi (Lenin’s Way. 레닌 기치, 1938-1991).

Talk 2
Title: The Images of Women in the Cinema of Uzbekistan
Speaker: Dr. Nigora KARIMOVA (Institute of Fine Arts Studies, Academy of Sciences, Uzbekistan)
Abstract:
The presentation examines the socio-political and cultural conditions that influenced the formation of films about women in the region. The author analyzes the features of the chronicle of women in the 1925-80s in the context of the prevailing ideology. Information is given about the first women filmmakers, about the first silent film actresses in Uzbekistan. The formation of cinema in Uzbekistan coincided with many socio-political reforms of the Soviet state: land-water reform, the campaign for the liberation of women “Khujum,” the fight against illiteracy, etc. In the Soviet era of “silent cinema,” the images of women of the new world are created. So, in the mid 30-ies of the twentieth century, in illustrated magazines and cinema periodicals (cinema magazines) for the mass audience, 70% of the visual information was photographs of happy women, despite the fact that there were almost no reports on political processes. The plots of all the “silent films” of the 1920s and 30s―“Minaret of Death” (1925), “Second Wife” (1927), “Leper” (1928), “Daughter of the Saint” (1930), “Chador” (1927)―were built around the female fate. The author considers stereotypes, symbols of the era, the main ideological dominants, plot features, representative models of female characters, which are reflected in feature films of the period under review.

About the Speakers:
Prof. Dr. German KIM is Director of the Center for Korean Studies, Kazakh National Al-Farabi University, Kazakhstan, as well as the Director of the Center for Central Asian Studies and Cooperation, Department of History, Konguk University, Korea. He has published many articles and books on Soviet/post-Soviet Koreans for more than 30 years. He is now staying at CSEAS as a visiting research scholar in 2019.

Dr. Nigora KARIMOVA is a film critic, the head of the Department of Cinema and Television, Institute of Fine Arts, Academy of Sciences of Uzbekistan. She received her doctor’s degree (Doctor of Sciences) from the Academy of Sciences on the subject of formation and development of the play cinema in Uzbekistan, and on the basis of the dissertation she published Cinematography of Uzbekistan (in Russian) (Tashkent, 2018). She is an author of many articles, media projects, scientific monographs on the history of cinematography in Uzbekistan. She is a member of Fédération Internationale de la Presse Cinématographique (FIPRESCI)

*This seminar is organized in collaboration with CIRAS joint usage/research project “Muslim Communities and Family Norms in Central Eurasia: A Comparison with the Middle East.” 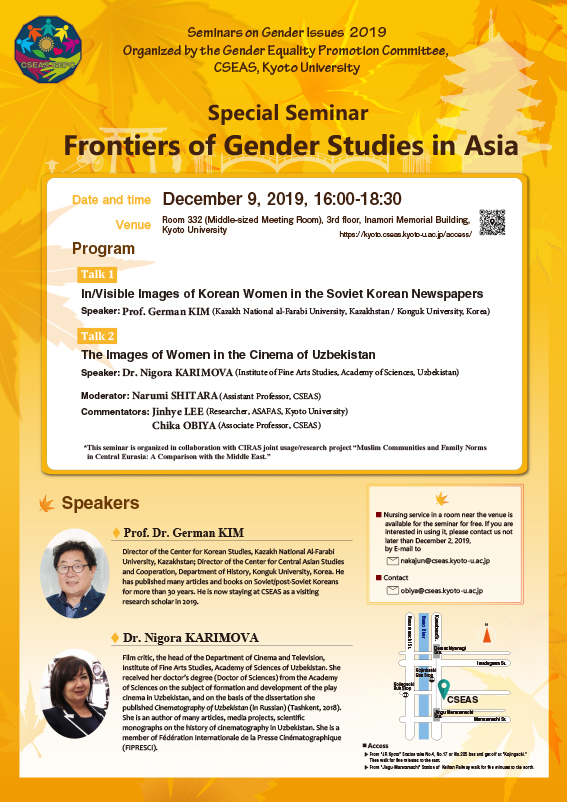