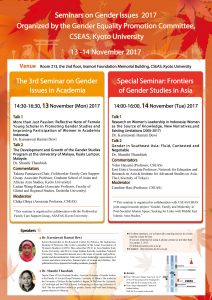 Abstract:
Over the last twelve years (2005-2017) I have devoted my time, energy, and material to investigating women’s leadership, one of the strategic gender issues in Indonesia. Driven by curiosity to check the validity of the common understandings that believed Muslim countries usually discriminate women, I start to observe women’s leadership in Indonesian Islam. Beginning with the discourse and practice of women’s leadership in Muhammadiyah Islamic modernism movement, and later on Nahdlatul Ulama Islamic traditionalist movement, I have expanded my research to Muslim women political leaders as heads of local government from 2008 until now. Through years of research, their thoughts, experiences, and political story become genuine sources of knowledge that enable us to uncover the bigger picture of the correlation between Islam, gender, networks, piety, sexuality in public sphere as well as social class. They produce a new narrative of Muslim women’s roles in public sphere, as women who are able to take initiative and shape the growth of Indonesian democratization which had been previously dominated by men. They also raise new understandings of veiling that are different from the western feminists’ understanding. Nevertheless, there are cases of women leaders who end their term badly due to corruption cases. From the perspective of a female researcher committed to promoting gender and women’s studies, the fact weakens my efforts at promoting gender awareness. There is so much to do to shorten the gap between normative expectations and the practical situation of women’s leadership in Indonesia.

Abstract:
In the literature on gender, there has been a tendency to view the countries of Southeast Asia as less patriarchal than other parts of Asia. Feminist anthropologists working in Southeast Asia unravelled the intricacies of gender in cultures that downplay it (Atkinson 1982; 1990) where gender inequalities were subdued and women were seen to enjoy personal independence. Despite the frequent appeal for regional characteristics and attributes in the field of Southeast Asia Studies, evidence remains largely country-focused and comparative work is rare. It is important to understand how gender is being constituted within a region.
One of the popular themes in Southeast Asian studies for which a comparative regional approach has been applied is the study of gender. A number of edited volumes of essays on gender in Southeast Asia have appeared (Atkinson & Errington 1990; Locher-Scholten & Niehof 1992; Ong & Peletz 1995; Sears 1996; Sen & Stivens 1998, Stivens 1991; Van Esterick 1996) and these collections cross national borders and historical periods, juxtapose “great” and “little” traditions, and sometimes go beyond the grand regional binaries of upland and lowland, island and mainland Southeast Asia (Steedly, 1999: 437). The key principle in gauging the regional assertions in favor of women’s “high status” is the degree to which the variance between “Southeast Asia” and other world areas can be defended and the appropriateness of generalizing across such a diverse area justifiable.
This presentation examines the bilateral organization of kinship in Southeast Asia and women’s active role in social and economic activities in all its complexity in a diverse and changing Southeast Asia. It is the bilateral kinship system that contributes to the consideration of Southeast Asia as a region that has certain shared practices and a region with a wide cultural span, diversity, and hybridity. A Southeast Asian “cultural matrix” that is fluid and dynamic can be related to the bilateral social organization system that allows for flexibility in its gender relations and inclusiveness in its group formation contributing to the flourishing of diversity and hybridity. Kinship in Southeast Asia is associated with a lack of structure and a lack of permanence and therefore the “cultural matrix” of the region emerging from this context is more of shared resemblances rather than fixed or normative in nature. Therefore, gender in this region can be seen to be constructed and constituted from such a context and this is an attribute of the “cultural matrix” of Southeast Asia. This is not to make a claim for a generalized and essential bilateral principle and with it gender equality in the region but rather, to argue that this social organization system that may manifest in myriad forms in the local context contributes to the outcome on how gender is seen in the region as fluid, contested and negotiable. Such diversity of behavior, responses and outcomes were and are being overwritten by homogenizing colonial, state, nationalist and global capitalist ideologies and discourses.

About speakers:
Kurniawati Hastuti Dewi is Senior Researcher in the Research Center for Politics, the Indonesian Institute of Sciences, and is also a member of the Asian Association of Women’s Studies (AAWS). She earned her Ph.D. in Area Studies from Kyoto University, and MA in Asian Studies from the Australian National University. Her research interests are in the areas of gender and politics, gender and decentralization, Islam and women leadership, representation of women and ethnic minorities, human rights of women and children. Her publications have appeared in leading academic journals.

***For these seminars, we will provide a nursing service in a room near the venue for free. If you are interested in using it, please contact us not later than November 5, 2017. (shitara[AT]cseas.kyoto-u.ac.jp)